The track was made wider, ABS added & brakes improved with much easier maintenance.

The DB7 was a modern E type,  just as beautiful as the original XKE. (The NPX design was taken from the XJ41-42 F type).

Whilst the dual wishbone geometry is excellent, the brakes were moved outboard. This heavier unsprung weight & heavier car requires much better damping. 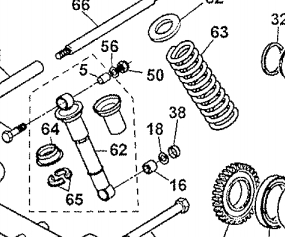 Aston Martin fitted Bilstein dampers which have quite an unpleasant “jiggly German BMW” feel to the suspension.They are by now, mostly worn out…and very often the mountings are tired and bolts seized.

The front suspension is way too soft, causing the car to roll very strongly forcing the contact patch of the low profile tyres into complete geometrical misalignment with the road.The V12 was more nose heavy inheriting the same problems with more than 2T of weight.Increasing track & tyre size further as they did, only worsens the poor geometry. 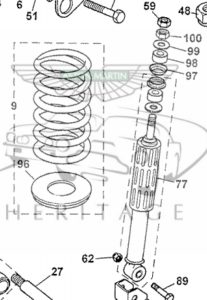 Here are typical Koni damping curves to illustrate the superior behaviour & control of Koni.Compared with Bilstein on low speed damping they are far superior and consequently more comfortable. 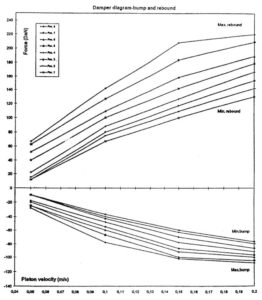 Building on this enviable reputation of koni damping, we developed a progressive rated bespoke spring set from scratch, and worked with Koni specialists to perfect the damping.

Some of the photos below were from the development program.

We were able to develop & calibrate the new system with data from a SPA dynamometer.

Aston Martin kept the Bilstein dampers & softened the suspension on the standard later cars.This adversely affected the handling & braking which was already not good, especially in damp conditions.

The DD kit Koni dampers were not serviceable and no specifications were listed.This is not an acceptable situation today.

We have successfully made a new damper to replace the one from the DD kit, which we can now offer either on a direct replacement basis, or as a complete built up replacement unit with the new progressive rate spring. THESE ARE BETTER than the originals and are full serviceable which the origjnals are not.

We don’t think either original set-ups STD or DD kit were satisfactory at all.

Traditionally British sports cars, were modified by preventing suspension travel using very hard springs with thick roll bars & dampers with very hard rebound ratings.The DB7 was no exception. This is entirely the wrong way to go about it giving desperately harsh ride and poor dangerous behaviour on the limit. In the modern school we set out to make a quantum leap forward, while actually improving ride comfort.

As a result our progressive suspension begins to give incredible levels of grip, control in corners and under braking. In the wet, driving which could become marginal, feels instead like the car is glued to the road.

This all gives a viable upgrade alternative to the tired DD suspension*, and a truly astonishing change to the behaviour & safety of the standard car.We know you will love it. 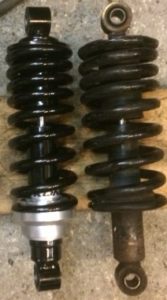 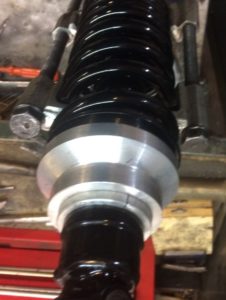 *A double adjustable damper is possible for the rear DD replacement if you would really like to go this route, using the damper curves we have managed to acquire from the TWR specced DD kit.