Substantial improvements can be made to the power output of the original engine plant. The engine is easily capable of making 400-450bhp reliably in road tune, so long as the original inadequate EFI is changed.

One of the most interesting areas is the totally undeveloped Jaguar based cylinder head and camshafts.

We get the same flow from modified exhaust ports as from the original inlet ports.

This better breathing produces more torque lower down, so the axle ratio can be raised, dropping fuel consumption, & putting the gear ratios in the right places.

Changing the low axle ratio is one of the most important changes to be made to the DB7, see- transmission.

Breathing is adequate with standard inlet valve sizes for 435bhp.

The DB7 S/C camshafts, are in fact simply retimed Jaguar N/A items with quite inadequate lift for the potential of the head.

No work was ever done by the factory on the head or any effort expended on proper camshafts. We can now supply these.

The DB7 i6 head, is a total “sleeper”. It can breath as well or better than modern heads from Cosworth or BMW, such as the widely respected XE or Duratec 2.0, without needing VVC.

The head was designed for lean burn using a block with unsually long connecting rods, so it is also exceptionally economical.

As a result, this engine comes with vast amounts of bottom end torque from as low as 1800rpm. This is more typical of an engine twice the size, such as the later V12.

Our flowed head has been fully tested using a superflow flow bench.

A brand new head being worked on in our workshop.

For the more ambitious:-

We developed larger inlet valves specially for this head nearly a decade ago.

On top of this, we produced a new design of cylinder head gasket to match and much improved head bolts using ARP fasteners to hold it all down.

We also took drawings of the original Cosworth forged pistons, so that we can reproduce them easily, using our own forgings. 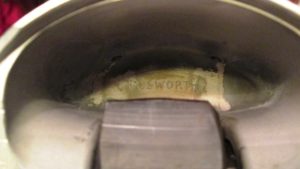 You are not invited to be involved in experiments or prototype work, it has all been done.

Much of it in Switzerland.